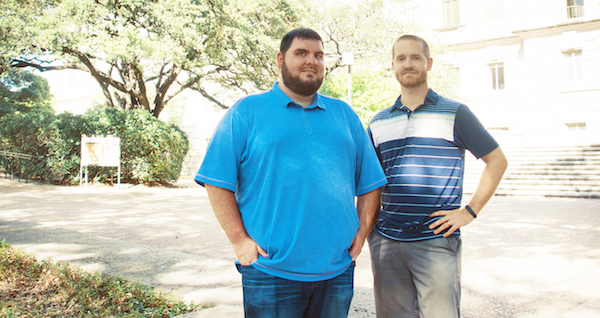 Here’s a situation most of us have dealt with before: You’re ready to move into a bigger apartment and split the rent, but can’t find a friend ready to move. Suddenly, you need a perfect stranger to share your most intimate space.
The scenario is only becoming more common as Austin transplants arrive in droves, driving up rents and creating demand for better and safer ways to meet roommates.
Given the circumstances, Jeremy Shreve and Adam O'Neal (pictured above) were surprised how many of their peers are still forced to roll the dice on Craigslist. They created

LeaseBuddies
View Profile
Follow
, a roommate matching service that focuses less on the property and more on the people who have to share it.
"We don’t feel anyone places the right amount of emphasis on roommate compatibility," Shreve said in an email interview. “When I first had the idea, my immediate thought was that this must already exist.”
But of all the apartment hunting sites out there, LeaseBuddies is the first to take the eHarmony approach, a comparison O'Neal is fond of using as the company's CMO.
"People get matched on the things that actually matter in a living situation," he said. "Preferred climate, cleaning preferences, groceries, bills and schedules.”
That process is based on a five-page questionnaire that establishes preferences and behaviors spanning every roommate pain point from noise and dirty dishes to sleep and social schedules.
But even if you can collect that information, building a personal matching algorithm is easier said than done, and the co-founders aren’t programmers. They enlisted a developer to build the site and the database behind it.
“One developer called on an old mathematician and computer science Ph.D. friend to help us with the problem of matching thousands of users against each other in real-time, which was no easy task,” Shreve said. “We toyed with the idea of using Ruby/Rails, but in the interest of easily being able to hire more devs in the future, we chose to use PHP and the Laravel framework. It has a great set of libraries for many common elements of a web application.”
They also hired two designers to give the site its clean UI (shown below), which shows your compatibility with another user when you mouse over their profile. There’s also an advanced search feature that’s only visible when it’s needed.

LeaseBuddies has grown to 1,300 users in Austin since it went online late this summer, with a target of 10,000 before expanding to other cities in Texas and ultimately launching nationwide.
“We’re laying the groundwork and infrastructure to handle a much larger user base,” Shreve said. “We expect 2016 to bring us over 10,000 users before we look to expand beyond Austin.”
In the meantime, the duo is seeking investors to help the bootstrapped startup prepare to scale. That means a lot of networking, which is teaching Shreve a lot about being the CEO of a growing startup.
“It’s not as simple as ‘build a great product and venture capitalists will knock at your door,’” he said. “Networking happens everywhere, and you never know who is going to make the magic introduction that helps you move forward as a company.”
Shreve says his co-founder has been leveraging everything from his LinkedIn contacts to his strong golf game and even cold calling for connections.
He offered this advice to other young entrepreneurs:
“The darker side of this navigation is constantly asking ourselves questions like, ‘how many views does that blog get per article,’ or ‘Is this guy meeting with us as a potential investor or is he trying to sell us on a service?’ I think we’re doing it right and getting great results, but that’s something Austin entrepreneurs should walk into with both eyes open.”