Can Empathy Have an Impact on Business? Rapid7 Is Betting on It.

In a previous life as an independent sales rep, Gerald Blancett would work out of coffee shops or his home, chasing deals as a “lone wolf.” Closing deals was always front of mind, and he was skeptical about making the jump to a company that touted a great culture.

“I was like, ‘Culture is cool, but culture doesn’t make dollars,’” Blancett playfully recalled from inside Rapid7’s Austin’s offices in late January.

While looking to join the cybersecurity industry, Blancett came across Rapid7. The SaaS platform stood out to him, and throughout his interviews, team members would emphasize the culture of the Austin office.

He took it all with a grain of salt — until he started working there.

“The culture became something that I value and something that is important to me,” said Blancett, now a sales manager at Rapid7. “I’ve become more and more protective of it. It became a big part of the reason why I’m here.”

Rapid7’s Austin office is particularly special, even within the larger company: It claims representation from more teams than any other location. Team members from within the Austin office are proud of how well they cross-collaborate with one another, and they attribute it to the company’s five core values: “Bring You,” “Never Done,” Be an Advocate,” “Impact Together,” and “Challenge Convention.”

As a group, those guiding principles paint a picture of empathy and curiosity that employees can — and actually do — emulate. The core values may only be a few key phrases, but employees at Rapid7 said they’ve set the tone for a caring workplace that never stops advocating for each other and for its customers. 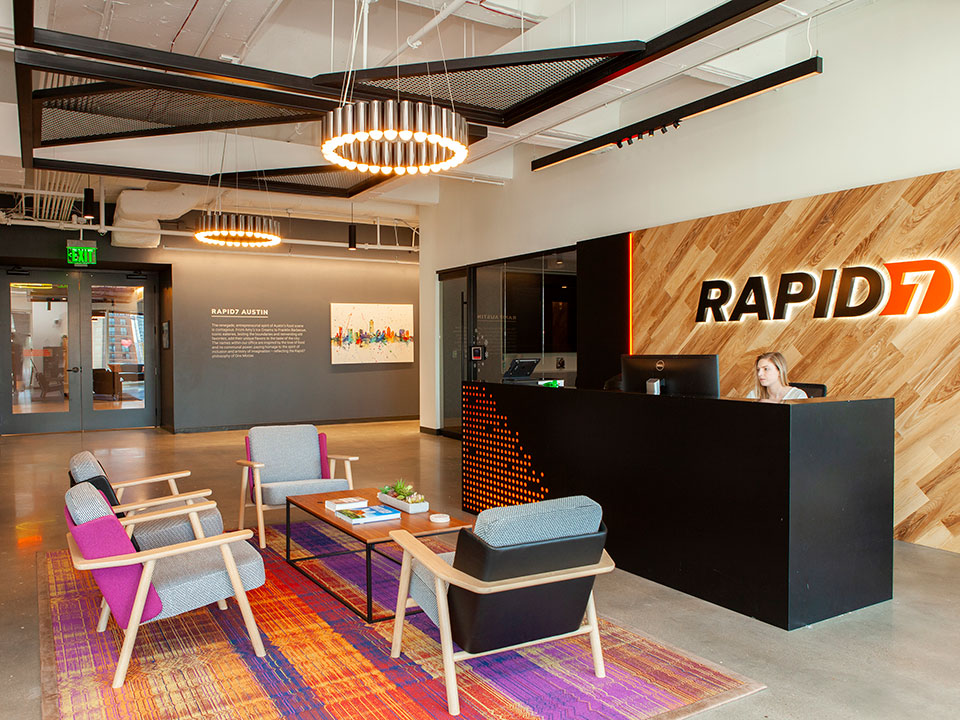 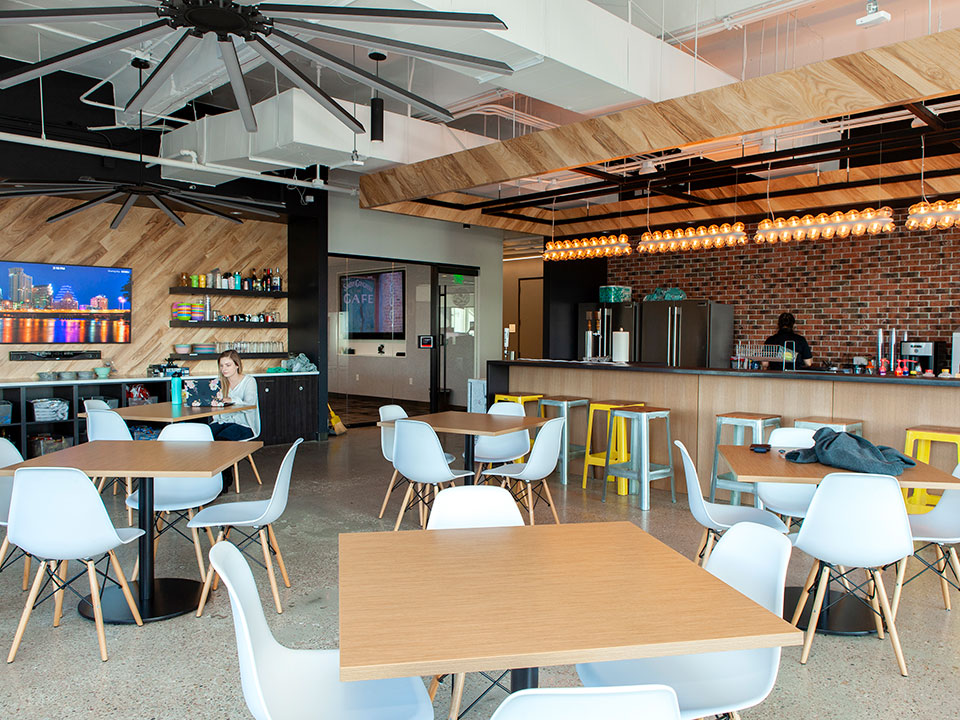 As an ethical hacker, Jay Paz is used to challenging convention. Serving as the director of penetration testing at Rapid7, he and his team are constantly tinkering and looking at problems from different angles. To someone like Paz, who is in a customer-facing role, keeping up with continuing education and industry trends is one of the most reliable way of keeping Rapid7’s customers protected.

“It’s important to think of unique ways to solve for what we see in the office or what we see with our customers,” Paz said. “If we just stick with the tried and true, we’re always going to be stuck. We want to take risks to see if there is a better way. If we don’t stop to think about the possibilities, we’ll never get to new goals or new milestones.”

Becky Anzalone, a senior manager on the customer success team, agrees. She encourages her team to pipe up with their ideas and to think critically about what they’re asked to do — in essence, challenge the convention of the way things are done. She welcomes it when her team offers an alternative way of doing something.

If we don’t stop to think about the possibilities, we'll never get to new goals or new milestones.”

“It’s not because they're trying to challenge me or because they’re being difficult,” Anzalone said. “It’s because they bring in experience from the outside. We’re really open and receptive to that because we need to have those ideas in order to keep growing.”

It seems to be working well for Rapid7: Since she started in 2014, Anzalone has seen the company leap from 450 employees to nearly 1,620. With that growth, she said Rapid7 has evolved from a few product offerings into a powerful SaaS platform.

Even with the significant accomplishments of the past few years, team members say there’s a prevailing sentiment that the work is never done. But that doesn’t mean that employees are staying late — it means they’re never fully satisfied with the status quo.

“If we aren’t continuously working hard to learn more, to understand new technologies, to dig into old technologies, then we couldn’t keep up with the demands of our customers,” Paz said. “You may think that you are the stealthiest of ninjas on a network, but there comes a day when you encounter something that you’ve never seen before. If you aren’t understanding what is out there, then you won't be able to actually help customers understand where those security gaps are.”

The attitude can be seen on the customer success team, too.

“If we just took our customers’ word at face value when they say they’re happy, we wouldn’t be giving them the level of service they deserve,” Anzalone said. “When a customer says they’re happy, I think, ‘What does that mean? What else do we need to do to progress the needle forward?’ Because happiness does not actually, at the end of the day, equate to them getting the value that they need from Rapid7.”

Making an impact, together

Empathy may not be the most tangible feature of a workforce, but at Rapid7, employees said they take care of one another and their clients in thoughtful ways that go beyond simply exchanging pleasantries about the weekend. Rather, they are interested in the deeper motivations of their customers and getting to the core of their problems.

Blancett has never held the type of role his customers do. Perhaps because of that, he believes that success hinges on his ability to listen and to empathize with their needs.

“Empathy is important,” Blancett said. “Understanding the position that other people are in will help you better connect with their mission and see how you can help. And maybe we can be a true consultant by considering if there is something that we’re missing that’s not specifically Rapid7 related.”

Anzalone, also in a customer-facing role, got into the industry because she wanted to help people. As a manager, she’s now able to help her customers and her team. It also allows her to see her team pick up the mantle of advocacy.

“Recently, a CSM on my team traveled down to Houston to meet a customer who was having some challenges with the product,” Anzalone said. “She wasn’t going onsite because she had a solution to the problem — she didn’t. But she wanted to show that she was advocating for them internally and was ultimately able to get the solution prioritized. I think having that face-to-face conversation really showed that we care and that we’re accountable.”

It’s not just the customer who benefits from the culture of compassion, Anzalone said. Internally, Rapid7 employees look out for each other and work together to solve problems. Oftentimes, this ends up helping all parties.

Understanding the position that other people are in will help you better connect with their mission.”

Recently, a colleague reached out to Paz for help. There was an ongoing ticket that had been open for several months. The colleague indicated that if the ticket wasn’t resolved soon, there was a good chance the client would not renew its contract.

To rescue the account, and stick up for the client and his coworkers, Paz took the situation to one of the directors in the customer success organization.

“I think it is just as important — maybe more important — to be an advocate for peers,” Paz said.

The director then advocated for Paz by personally taking up the issue and seeing that it was resolved. “We were able to help a customer through external and internal advocacy to help each other out to solve the problem,” Paz said.

Freedom to be yourself

Perhaps one of the most important values Rapid7 has is “bring you.” Seeing the humanity behind coworkers and clients makes the office culture one that’s built on trust, understanding and the freedom for people to be themselves.

“‘Bring you’ emphasizes the differences that we have as individuals and how we celebrate them,” Paz said. “It’s really important that we are sincere and aren’t sacrificing our thoughts or knowledge because others might think differently. We feel enabled to create a better experience for everybody.”

By being themselves, team members say everyone in the company can feel empowered to question the status quo, challenge themselves to hit new personal goals and ultimately feel supported by their team. An authentic and empathetic workplace may seem like a lucky coincidence brought on by hiring choices, but Anzalone says the core values have definitely set the tone and contributed to the company’s success.

“I think that what really transcends the culture in general, is that we’re not just people here to do a job,” Anzalone said. “We’re people who really care about each other.”

Responses have been edited for length and clarity. Photography by Rudy Arocha.

View profile for culture, news + jobs
We are hiring