Game on: Plot Guru pits you against your friends in streaming TV trivia 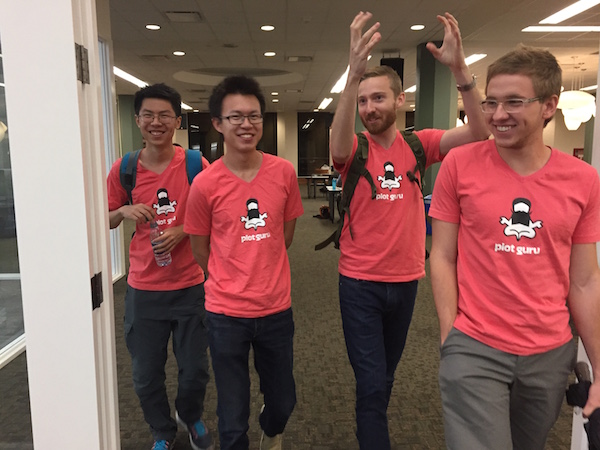 In the latest installment of Apps You Wish You’d Thought Of, the Netflix streaming trivia app Plot Guru officially launched on iOS today.
The trivia app syncs up with the show you’re watching and poses timed questions to you and your friends, keeping score of who guesses the next twist best. It’s everything you love about going out for trivia night, available from the comfort of your couch.
You can still compete when you’re watching alone, too. There’s a single player mode, and you can share your scores on social media.
We caught up with co-founder, designer and content manager Ethan Dirks after the company pitched investors at UT’s Recess Pitch Competition. Plot Guru didn't win, but said the exposure was good preparation for the launch.
“You have to put yourself out there,” he said. “This next month is going to be critical. We're asking people to change their TV viewing habits, which is by no means an easy thing to do."
You wouldn't know it, judging by the initial response. With 4,000 early signups and 1,000 new subscribers per month, Plot Guru debuted in the iOS app store to high expectations.
Now the company will focus on improving the app through user feedback and new content, which is no picnic for Dirks. Before the launch, he triple-checked more than 2,000 trivia questions.
The company will also embark on a marketing push to attract users and investors. The company has been fully bootstrapped since it was formed at 3 Day Startup ATX last year, but will need extra capital for the marketing effort.
Founder Justin Key, who based the app off a game he used to play while watching American TV with Swiss friends, said the game is also a platform for advertisers.
“We've had a ton of positive feedback from our beta testers, so we're optimistic that the app will be well received,” he said. “But it’s also a marketing platform that brands can use engage with viewers in a new and unique way.”
With thousands of users actively engaged with two screens during a show, the odds of Plot Guru raking in ad revenue looks pretty good.