How to build an office employees will love

In the tech sector, competition for talent and the spread of startup culture has raised the stakes in office design.

Free meals and office kegs are becoming standard, so companies must find more creative ways to make the office a place employees want to spend the majority of their week.

One of the ways companies craft a cultural experience meaningful enough to retain employees is with elegant office designs that marry comfort with efficiency and cultivate creativity.

“The first thing any company should think about is how work gets done in the office,” said Morgan Miller, an account executive at Shelton Keller Group, an Austin office design firm. “You don’t have to spend a ton of money to make the space appealing for potential employees. It will pay dividends to invest in a place that will attract the talent you need.”

“Flexibility is key. A good task chair is a must,” Miller said. “I think tables in meeting spaces that fold and that can offer data and electric connections at the table top make the space far more adaptable. Making sure all of your products have the ability to adapt to technology versus embedded technology will also give the space more flexibility as you grow.”

But designing an office employees will love isn’t that simple. Here are three Austin companies that recently went to great lengths to get it right: When the five-year-old agency renovated its office space in the historic Norwood Tower downtown, it stripped its unit down to its gothic revival bones.

“We took the space back to its original form by exposing the structural elements and playing off of the raw beauty of the construction,” said Kristin Knight, director of agency culture. “Concrete pillars are exposed throughout the space and incorporated into the team rooms. We also created an open concept layout to bring in as much light as possible from the windows in the front of the building. This gives everyone sitting on this side of the building a front row seat to the gargoyles and ornate tracery on the facade of the building.”

As is common in startups and advertising agencies, an open floor plan fosters collaboration while team rooms of varying sizes offer privacy and focus for client calls and brainstorming sessions. Movable walls in conference rooms make the space modular and adaptable, while wipe boards throughout the office enable employees to sketch out ideas virtually anywhere.

“The space is being well used,” Knight said. “At any given time, you will find people collaborating in break areas, talking across desks and planning and concepting in conference rooms. The space definitely promotes creativity.” 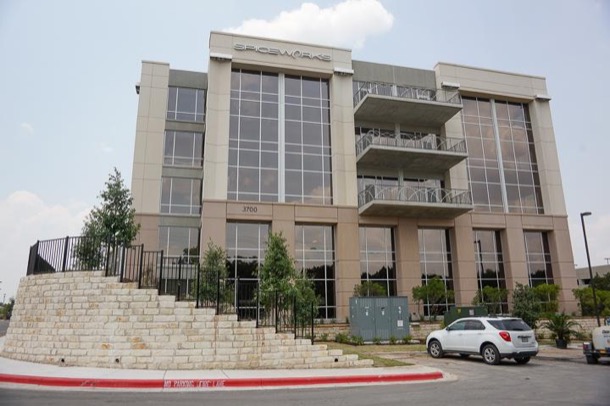 Of its nearly 500 employees, Spiceworks houses roughly 350 in its Austin headquarters. The culture in that office has earned the company recognition as a great place to work, including the number two spot on Business Insider’s list of best startups to work for in the country and a ranking among Glassdoor’s top 10 small and medium sized employers.

A large part of the appeal is a widely shared belief in the company’s mission, which is to serve the IT profession with top-notch support. Director of Talent & Culture Jennifer Cantu said the same team ethic shown during the company’s recent renovation project, which involved developer HPI Real Estate & Services, the general contractor Zapalac Reed and a huge team of Spiceworks employees.

“It’s one thing to spend your weekend moving, but it’s another to get your family involved and spend countless hours getting the building fully functional for the following work week,” Cantu said. “We were really fortunate to have a passionate team that owned this move and poured their creativity into an awesome office that we are proud to call home.”

The company’s office and move director, Jeff Dean, helped with everything from working out the blueprints to sorting out lighting details, enlisting volunteers, and assigning color-coded stickers.

The company also had support from other employees and their family members, who served as a larger design support team, IT team, move captains and a moving crew. The kitchen – It’s huge! We have two espresso machines, four Keurig machines, several sinks and dishwashers, more space for employees to eat lunch together, and a picture wall of our new hires. The fitness centers – We have a communal gym with weights and workout machines, a yoga room and a basketball court! Yoga and CrossFit classes are offered onsite. The skylounge – We have a skylounge with a great view of the Hill Country and more space for employees to eat lunch outside. It’s a great space to get some fresh air during the workday! Earlier this month, Bazaarvoice celebrated its 10 year anniversary by cutting the ribbon on a gleaming new headquarters.

The Quarry Oaks building provides 137,615 square feet for the company’s 600 employees to work, play and recharge in style, with amenities ranging from sprawling common areas and fitness facilities to a mini Whole Foods.

“As Bazaarvoice moves into its 11th year as a company, it is important that we have a headquarters that not only reflects the company’s storied past and our bright future, but also incorporates the local community we have been tied to for the last decade. This building hits the mark on all accounts,” CEO Gene Austin said in a statement. “We had fantastic support with making decisions that impacted the design of the building from our external partners – all of whom are local companies renowned in their particular area – as well as from our Bazaarvoice employees. The result is an impressive headquarters building that our employees can feel proud to work in every day.”