Why these 3 Austin companies recruit internally for leadership roles

For many companies, promoting from within your own ranks leads to significant advantages to both employees and the company. This includes faster ramp times, opportunities for growth, promotion transparency and long-term buy-in from the teams.

We asked three Austin tech teams why leadership looks for internal candidates first and connected with a few recently promoted employees to learn about their new roles. 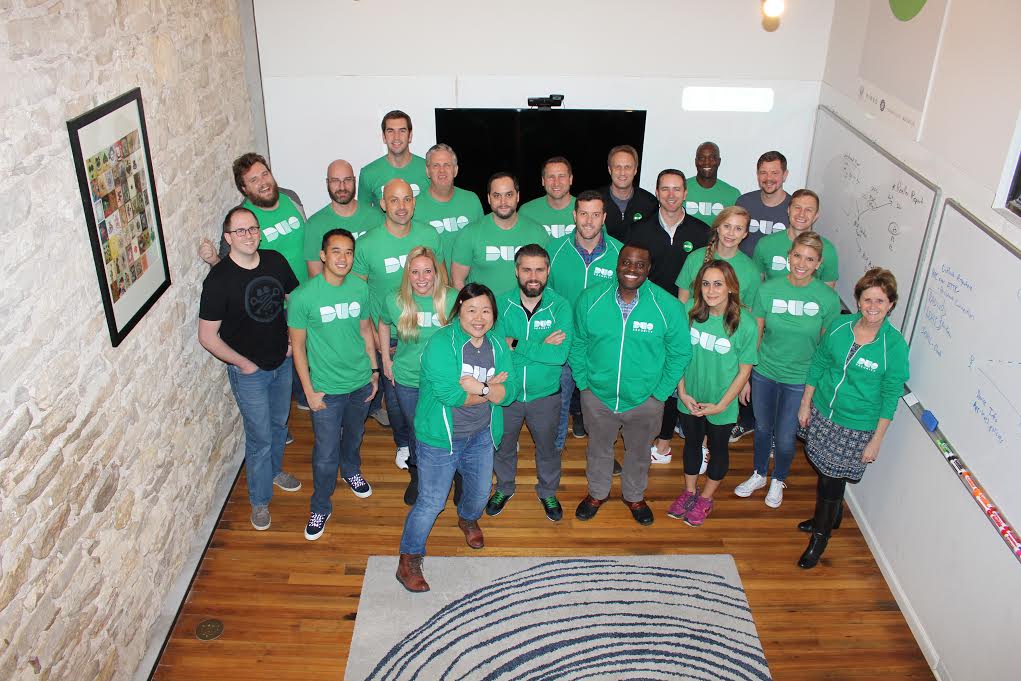 Jennifer Lawrence, Duo Security's VP of Inside Sales, said it's important to both hire internally and externally. The real challenge, she said, lies in determining which conditions make the most sense for any specific scenario.

I have seen internal hires get up to speed and provide more value to the company faster than external hires. Internal hires also live your company values. You have to demand both character and competence. You can’t trade one for the other. Internal hires allow you to be confident in both areas.

In our last organizational health survey, 98 percent of employees would recommend Duo as a great place to work. If we didn’t invest in our people and promote from within, we would not see a recommendation rating like that. Nobody wants to join an organization where you have nowhere to grow.

Hiroki was an early employee at Duo, and he came on board into a role that wasn’t even fully scoped (that role is now our account development representative). Hiroki quickly came up to speed on product and security vision, but beyond being a great sales rep he helped us define a program, process and mentor others. Hiroki has continually proven his ability to learn fast, take initiative, and do what’s best for our customers and our team. 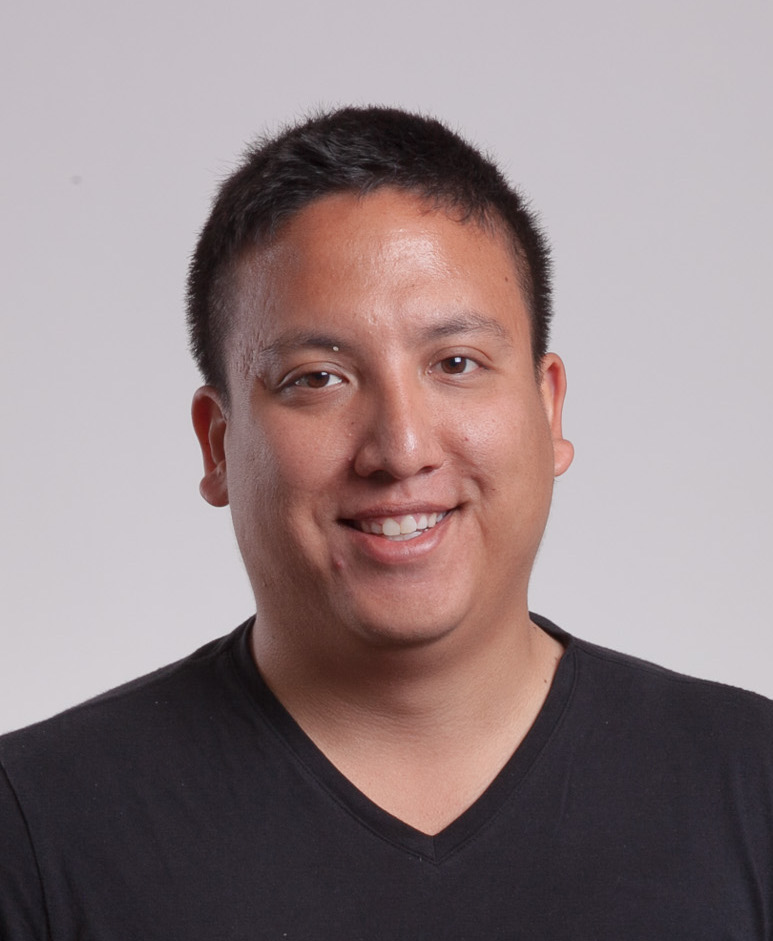 When you joined Duo, was it important that you had the opportunity to grow there?

Totally, but not really in the traditional sense. I was looking for a place where I could surround myself with people smarter than me, and Duo had that. I wanted to be able to personally grow, and learn from my colleagues in an environment that was collaborative. My desire was —and still is — to learn sales, and how to grow/scale a startup the right way. The privilege of that situation far outweighed a formal promotion or title change, but that being an ancillary benefit was pretty cool too.

Luck and curiosity. Whatever was needed. When a fast growing sales organization is small, everyone's expected to help with operations, onboarding, interdepartmental feedback, etc. I was lucky to be put in a situation where I had an opportunity to do those things, and I think I got the opportunity for a promotion because I was happy to do those things while consistently hitting my number. We learn pretty quickly here to take action and make decisions with the company’s best interest in mind first, followed by your team’s best interest, and finally your own best interest. Keeping that philosophy in mind rather than the silo of your own job description makes it pretty straightforward to understand what’s needed from you day in and day out.

When I got an opportunity to build out a new account management team within Duo I was thrilled. I got a chance to pass on the values I learned from Duo and those customers to my team. 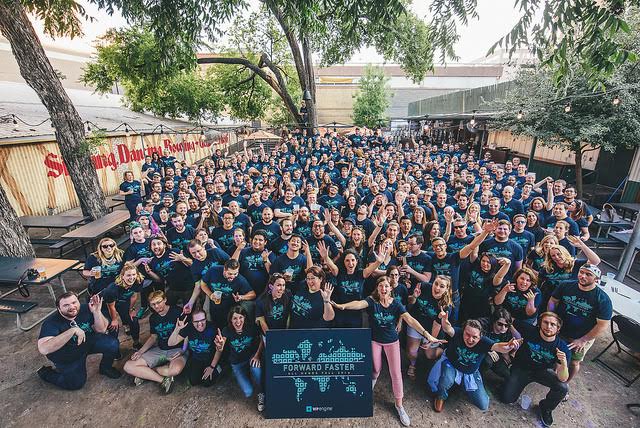 One of WP Engine's core values is Where the Best Get Better. Erin Barber, senior director of employee experience, said this means that their company commits to challenging themselves regularly to inspire learning and growth. When an employee expresses an interest in a new open role, WP Engine gives them the first chance at it and has allowed employees to create new positions that complement their skill set and passions.

So many! I led a workshop about career development a few months back and we spent a good amount of time talking about why growth matters. Our discussion ranged from recognition and engagement to opportunities for individual pay growth, to improving our ability to positively impact customers. It really affirms our belief that supporting our employees to achieve their goals is good business.

Healthy movement across the organization is the best way to generate alignment and shared understanding between teams. In 2016 we had a large percentage of our openings in the company filled by members of our customer support organization. This infusion of previously customer-facing talent into other groups of our business strengthens the ongoing collaboration between our internal teams and further commits that being customer inspired is at the heart of all we do.

Last year, we promoted more than a quarter of our workforce, which means I can point to a lot of great stories. At the same time, I'm just as blown away by employees who measure their achievements differently — perhaps in the way they've lifted up their peers by education or through recognition, served customers, or supported our community and culture via various committees. It's fun to see growth and contribution in all of these forms! 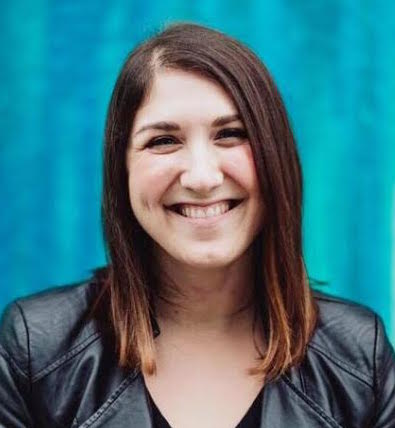 Shayda Torabi is the marketing intelligence manager at WP Engine.

When you joined WP Engine, was it important that you had the opportunity to grow there?

It was absolutely important for me to work for a company that I had the opportunity for growth. When I joined WP Engine we were much smaller, and I knew that I would be wearing a lot of hats and getting to work on a lot of different types of projects. There are so many moments where I reflect on how I was able to help influence the direction of a project or suggest and implement an idea, which is a testament to the culture that's been created here. It's been fun to see myself grow alongside WP Engine and truly see the impact I've been able to make on the business.

I've always thought of myself as a team player, so even as the company continued to grow and our roles became more specialized, I enjoyed helping out where I could to gain exposure on different teams and with different projects. It was through that willingness to help not only my direct team but work on cross-departmental projects that gave me the exposure to what areas I could begin to add value to at the company. I think also being confident in what value and skills you bring to the table is key. In my recent promotion, I was able to move into a role that fully utilizes my skills to help the business, and that to me is a win-win. 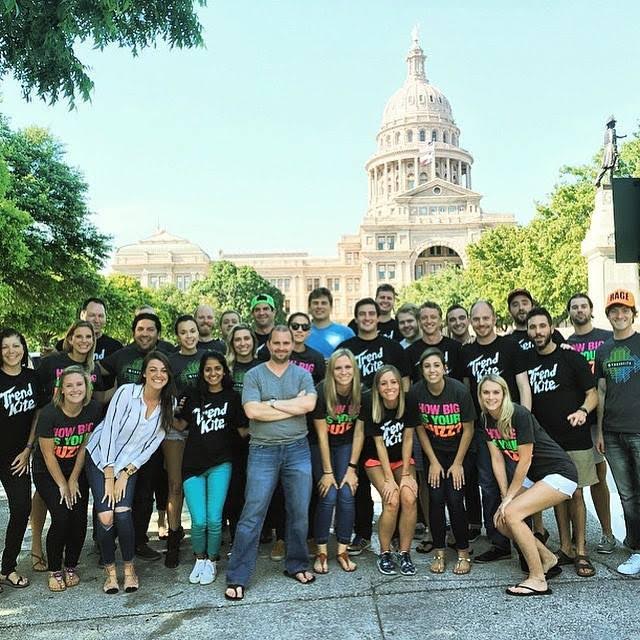 Whenever possible, TrendKite hires internally before sourcing external candidates. And at their office, this happens pretty regularly. Co-founder and VP of Sales AJ Bruno said that this plays a key role in their work hard, collaborate, win and get rewarded culture.

When you promote from within, a key advantage to the company is that you get buy-in for sharing of best practices and collaboration from those that have been successful. For the sales team, in particular, we conduct a manager and peer evaluation regularly so we are able to mentor accordingly and ensure people have a clear line of sight on how they can reach their next career goal at TrendKite. When you’re promoted or not promoted here, it’s black and white to everyone as to why, and that level of transparency is so important.

Team members come in with a fire lit and are willing to work extremely hard every day not only because they believe in what they’re selling and what we’re building together, but because they see a direct line of sight to move forward in their career, and there is a clear expectation on how to get there. At many other companies, how you get promoted is left very ambiguous. Here, it is based on performance and attitude — it's outlined every step of the way. It creates a culture of not just working hard for today or for this month, but toward a long-term path, and it's motivating to see continual examples of people before you who have worked their way up. 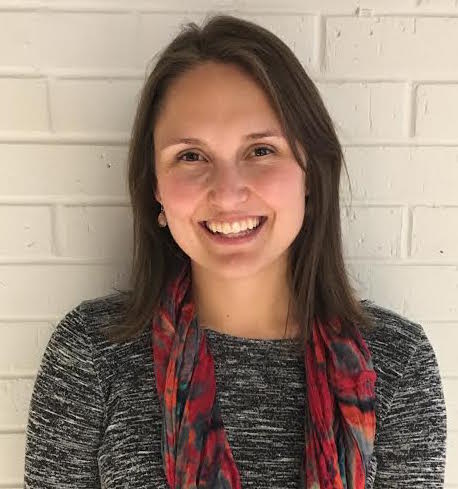 Lemieux joined the team a year and a half ago originally as an account executive before being promoted to team lead and recently as sales manager.

Was it important that you had the opportunity to grow at TrendKite when you first started?

Absolutely. I was excited about TrendKite because as it was still a small startup (at the time under 50 people), I knew I would have a chance to move up quickly if I put in the effort. I had just come from working in a much more corporate environment, and I wanted to be a part of a company where I could have a real impact on the organization, the people around me, and specifically, grow myself. I didn't want to work for a company where I felt I would ever be stagnant both personally and/or professionally. TrendKite has pushed me, day in and day out, to be a better sales rep, a better leader, and a better person all around.

Prior to moving into my new management role, I worked hard to be considered a consistent top seller. I realized I wouldn't be able to coach others to emulate my success if I wasn't successful myself first. So with that in mind, I was hyper focused every day — whether that meant bringing great energy to my demos, organizing my pipeline, or just being present on the floor. I also made sure to celebrate my team's wins by organizing outings or just making sure I high-fived my teammates every single time they hit that gong (sometimes that could be upwards of 20 times per day)!

Responses have been edited for clarity and length.

Images provided by feature companies.
What does your company do to improve culture? Let us know via our tip line or tweet us@BuiltInAustin