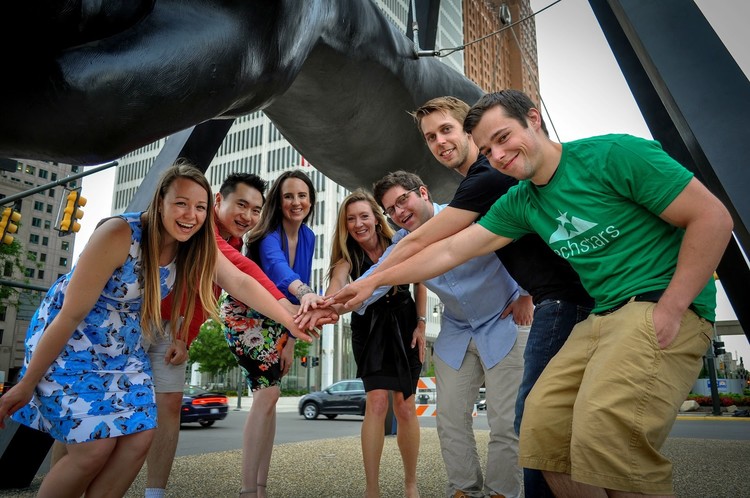 In December, Austin’s Mayor Steve Adler visited Mexico to meet with delegates and promote the shared business and cultural interests between our city and our neighboring country. His trip included the C40 Mayors Summit in Mexico City, climate goal discussions, business networking — and a presentation by a ride-sharing startup named SPLT.

“We were asked by the Mexican delegates to present to the mayor in a panel on the concept ‘How to work with companies to provide relief to traffic congestion,’” said Anya Babbitt, SPLT’s CEO and co-founder.

For Austin, a city consistently battling traffic while still determining which ridesharing companies are the most dependable, SPLT's concept of working with businesses adds a new element that our city hasn't seen yet.

The startup, which has a presence in Atlanta, Austin, Detroit, Mexico City, New York, and San Francisco, develops carpooling software that connects employees from large organizations to share rides in their own vehicles. The more employees share rides to work, the less cars on the street.

“By taking five percent of the cars off the road, our highways can move 50 percent more freely,” said Babbitt.

One of the companies SPLT works with is Bosch, a 400,000-person global company that started in Mexico in the 1950s. A member of Bosch had reached out directly following SPLT’s victory at Google’s Demo Day in Detroit. Within two weeks of deployment, Babbitt said half of Bosch's employees were already participating in the program.

“We saw a greater opportunity in the workplace, partnering with global enterprises,” said Babbitt. “It was a niche area that no one was really serving.“

To differentiate themselves even further, SPLT also added a rewards system element to trigger behavioral changes and motivate users to stay in the system — currently, the only ride-sharing company to do so, according to Babbitt.

“Working with a critical mass is really key. Through the help of the organization, we’re able to create a whole branded rewards platform,” said Babbitt. “Dependent on the culture of the organization, some companies opt to have really nice branded swag, others give monthly cash bonuses as a payout, extra vacation days or remote days from home.”

SPLT's ties to Austin extend deeper than having a working relationship with the mayor and a local townhouse the team operates out of.

Babbitt met her now technical co-founder, Yale Zhang, here in town when the two stayed across the hall from one another for unrelated bachelorette and bachelor parties at the Omni. They also won a cash prize for earning first place at a competition last year from Austin-based Trammel Ventures, and came in third place during the Hatch Pitch startup competition last year during SXSW.

The 2015 Techstars Mobility graduate shows no signs of slowing down, serving more than 100,000 users across six cities.

This week, they announced a seed-stage investment by InMotion Ventures for an undisclosed amount. Recently, they partnered with Lyft to provide non-emergency medical transport. They are working with the Smart City Consortium, and as they prep for a European and Latin American expansion next month, they will also present at the highly competitive SXSW Accelerator Pitch Event amid 49 other startups.

Babbitt said she hopes to expand the Austin team, and — with the help of the Mayor’s office — solidify more local partnerships.

"With the passing of the $700 million bond measure, SPLT is really poised to partner with the City of Austin to battle traffic,” said Babbitt. “The answer to congestion is not in building double-decker highways, but instead through innovation, integrated partnerships and technology to see a meaningful impact in congestion and CO2 emissions.”