Where are they now: Checking in on our 50 Startups to Watch | Built In Austin Skip to main content
Loading...

Where are they now: Checking in on our 50 Startups to Watch 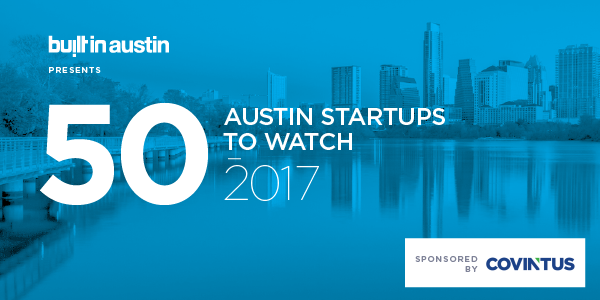 We’re more than halfway through 2017 and a lot has happened in Austin tech. Among other headlines, Amazon bought Whole Foods for $12 billion, RetailMeNot was acquired for $630 million by Harland Clarke Holdings Corp, and Uber and Lyft made their long-awaited return in May.

And those are just a few top-billed examples from companies making waves. But what about our younger, up-and-coming startups?

We published our 50 Startups to Watch in 2017 back in January, highlighting the local startups under five years old we expect big things from throughout the year. Here’s what they've been up to since.

At the end of April, eRelevance closed out its sixth consecutive quarter reporting triple-digit revenue growth. As a result of the startup’s fast success, existing investors dropped another $5.1 million to help eRelevance reach its next financial milestone. Rally Ventures, Chicago Ventures, Miramar Venture Partners, Martin Investment Holdings and Capital Factory led the round. The company plans to expand its team from about 60 to 80 by the end of the year.

Get Alerted for Jobs from eRelevance Corporation

Serial entrepreneur Jay Manickam’s latest startup Everfest received a boost this June with a $3.6 million Series A. Everfest provides festival goers with information on events all over the world and helps connect festival vendors, artists, organizers, sponsors and volunteers. The funding will be used to increase international festivals on the site and expand its product, development and marketing operations to scale its premium program.

Get Alerted for Jobs from Everfest

EverlyWell
View Profile
We are hiring

At just two years old, the home health diagnostic testing startup EverlyWell continues to gain traction. In May, the company raised $2 million to expand its product line with more at-home testing kits, while increasing its headcount.

The AI software and hardware company Isocline rebranded to Mythic this year and closed a $9 million Series A toward the end of March. DFJ led the round, which will be used to scale Mythic’s engineering operations and take their software and product to market. The Mythic platform relies on local AI sources to power its electronics, wearables and security platforms.

Launching in November of 2016, Message.io got off to a hot start with a $2.5 million seed round and a partnership with Microsoft as it came out of stealth mode. The bot syndication service received another $2.9 million from investors in December followed by an additional $2.9 million in March, bringing the startup’s total funding to more than $8 million. Investors include Capital Factory, Two Sigma, Goldcrest Capital, ENIAC Ventures, Khosla Ventures and Y Combinator.

Get Alerted for Jobs from M.io

realtor.com
View Profile
We are hiring

Opcity raised the second largest Series A in Austin tech so far this year when it closed a $27 million round in May. The real estate tech startup received the support from Silicon Valley-based Icon Ventures, AI-focused and Canadian-based Georgian Partners and Austin firm LiveOak Venture Partners. The funding will be used to grow its employee headcount in sales, marketing, design, general counsel, IT, data science, business analytics, recruiting and service operations.

Wild Basin Investment pumped another round of funding into edtech startup Querium in January, this time with a $3.2 million Series B to expand its marketing and sales operations. The company uses an AI-learning platform to help students strengthen their STEM skills through personalized, bite-sized lessons.

Get Alerted for Jobs from Querium

Digital Pharmacist underwent a rebrand from RxWiki following the acquisition of Telemanager at the end of January. In March, Digital Pharmacist acquired PocketRX to offer their clients mobile prescription management tools. And in June, the healthtech startup closed a $6.5 million Series B, co-led by Austin VC firm LiveOak Venture Partners and NYC-based Activate Venture Partners. The funding will be used to develop new products and accelerate market adoption.

Get Alerted for Jobs from Digital Pharmacist Inc.

Self Financial
View Profile
We are hiring

After raising its customer base from 10 to 24,000 within two years, Self Lender is poised for another big year ahead. The credit-building startup scored a $5 million Series A this summer, led by Silverton Partners, Deepspace Ventures and Accion Venture Lab. Co-founder and CEO James Garvey said the company will use the capital to expand its engineering and operations teams.

Marking the largest local funding in Austin for the year thus far, SparkCognition raised a $32.5 million Series B in June to meet increasing market demand. Participants in the round included Verizon Communication’s VC unit Verizon Ventures and The Boeing Company, through its Boeing HorizonX unit. In addition to the funding news, SparkCognition also was recognized as a 2017 Red Herring Top 100 North America Winner.

Get Alerted for Jobs from SparkCognition

Three days after data.world’s big funding news in February, Tenfold raised $15.7 million from 10 undisclosed investors. The Austin company develops CRM phone integration software and did not comment on the uptick in funding; however, Tenfold has continued its hiring initiatives to expand the engineering, sales, marketing and operations teams.

Get Alerted for Jobs from Tenfold

Liveoak raised an additional $1.7 million in June, from six investors. The company's live conferencing, collaboration and e-signature solutions gained a new user at the end of January, with John Hancock Retirement Plan Services signing on. The firm began using Liveoak’s tools to more efficiently onboard corporate customers and also invested in the Austin startup, according to a press release.

Get Alerted for Jobs from Liveoak Technologies, Inc.

In May, edtech startup PenPal Schools launched a VR field trip to help students experience “traveling” to Pakistan over a six week course. Using the YouTube virtual reality app and cardboard virtual reality headsets attached to their phones, students were able to explore the streets, farms, ancient forts and mosques of the city of Lahore, in the Punjab province of Pakistan. The company also raised a $1.25 million seed round mid January that included investments from the former San Antonio Spurs CEO, actress Sophia Bush, and a number of local investors like Joshua Baer, Charles Thornburgh and Justin Siegel.

Get Alerted for Jobs from PenPal Schools

In July, Clearhead announced that it had been acquired by Accenture for an undisclosed sum. Along with its co-founders, the local team of 70 will remain on board. The Austin startup joins Accenture Interactive to strengthen the personalization of the customer experience.

Get Alerted for Jobs from Clearhead

AlertMedia
View Profile
We are hiring

Founded in 2013, AlertMedia has gained some pretty big clients within the last seven months. In January, the emergency communications software provider deployed its solutions across H-E-B’s 400 grocery locations in Texas. In March, The Salvation Army began using AlertMedia’s notification technology at its Southern Territory headquarters. The Austin startup also signed on bus transportation provider Greyhound in April to improve communication efforts with 1,000 of its employees who aren’t always in front of a computer.

The former Austin startup Embark sponsored this year’s 13th annual Puppy Bowl, brought to you by Animal Planet. The annual event mimics the Super Bowl with 39 puppies competing for the most touchdowns. For the event, Embark offered its DNA dog services to identify the breeds of each doggo. See pics here. In July, the company confirmed its move to Boston and a $4.5 million round of funding.

Get Alerted for Jobs from Embark

ePatientFinder teamed up with Allscripts® in January for the release of GeoPrecise™. The tool provides patient identification and site feasibility analytics for clinical trial site and patient selection by referencing ePatientFinder’s Clinical Trial Exchange™ platform and the 45 million electronic health records from Allscripts. In April, ePatientFinder connected with Rep Network Partner to help physicians identify new options and access to patient care.

Get Alerted for Jobs from ePatientFinder

In addition to expanding its driver’s ed courses to Pennsylvania this summer, Aceable released 360-degree VR training videos to teach and instruct driver’s education. These videos have been implemented across all of its mobile drivers education products and are also accessible for free via YouTube to encourage safer driving.

Following its $24 million funding round in November, healthtech startup Medici planned an aggressive scaling plan that included nationwide expansion during the first quarter of 2017, with additional markets like the U.K. and South Africa planned shortly after. In April, the company officially launched in all 50 states.

Get Alerted for Jobs from Medici

AI real estate startup Ojo Labs announced in March its plans to open an AI training and call center in Vieux Fort, Saint Lucia. The center is expected to open in August and create 100 jobs at time of launch. “We need to employ artificial intelligence trainers and so these AI trainers will be tagging communications from consumers and teaching the machine what the intent of those consumers are,” said Ojo Labs co-founder David Rubin in statement at the time.