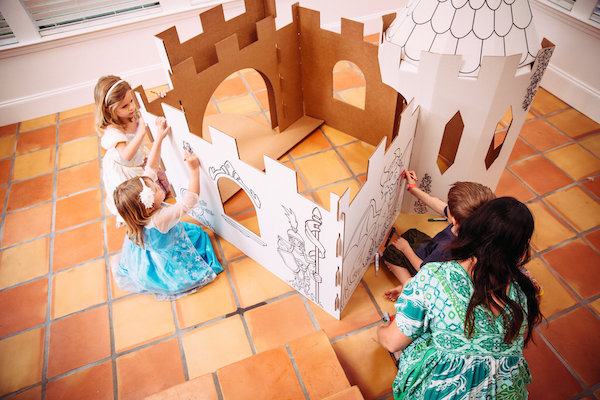 You don’t have to be a parent to notice kids spend a lot of time in front of screens.
Whether it’s on a TV, tablet or phone, the American Academy of Pediatrics estimates children consume entertainment media for an average of seven hours per day, which studies have linked to difficulty with everything from learning to nutrition.
And while some parents enforce limits on screen time or seek out educational apps, few solutions link the world wide web to the world of a kid’s imagination.
But now one Austin startup thinks they’ve found a way.
PopUp Play was founded by Bryan Thomas and Amelia Cosgrove, a couple who wanted to connect the digital toys of today with the pillow forts of their past. They combined their backgrounds in solar tech and engineering to create a four-and-a-half-foot fiberboard castle playset and an iPad app children can use to customize it.
Once the child finishes designing a playset, an adult places the order and the kit arrives within a week, ready to assemble in minutes.
Thomas said the point is to foster creativity and encourage offline play without discouraging technology.
“You’re not going to eliminate these things, nor do you want to,” Thomas said. “There’s a parental need out there for something that is engaging to kids without creating a sense of conflict.”
In testing the app and playsets over the past year, Thomas said they work just the way he and Cosgrove planned. Thomas recalled one demo in particular with a five-year-old boy who was enjoying the process of designing his own castle in the app when Thomas took him around the corner to see the end result.
“The phrase ‘mind blown’ was invented for this purpose,” Thomas said. “This kid’s jaw dropped, and then he went back to the app and saw the similarities.”
The product is designed for children ages three to nine.
PopUp Play went from an idea to a Kickstarter campaign in a little more than four months. The company raised a little more than $25,000 from 135 backers, the largest of which were able to place pre-orders for their own playsets.
The company began filling those orders and accepting new ones from the public this past weekend.
As for the playsets themselves, they’re built kid tough. The white quarter-inch thick fiberboard is washable to allow coloring and painting, and is light and collapsible for easy shipping. Single prototypes have withstood play from hundreds of children at Maker Faires in Austin and New York.
“It’s also non-toxic, so you can chew on it,” Thomas said. “One kid did that.”
PopUp Play plans to add a gingerbread house playset to the mix later this month, with rockets and pirate ships planned for 2016. Fans can find an Android version of the app in the Google Play store next year, too.